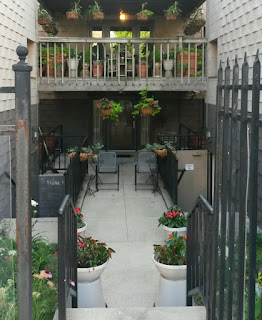 It's taken me a week to process and share an opinion about Sherman Park, and though I'm not a a resident of this neighborhood-I do live in Milwaukee (I think an important distinction) in a multiracial setting with those who have "made it", and those who have been left behind. I deliberately am posting here as opposed to some of the other social media platforms-because as a business owner-so much of this is about the intersection of COMMUNITY and BUSINESS. Both have equal importance. I am old enough to remember this happening in my hometown-Flint, Michigan-the feelings just don't change, even as the years go by. It seems we are doomed to repeat history.
This week though, I attended a Housing Authority City of Milwaukee (HACM), where the Mayor Barrett was present, as he is apt to be these days. What was most striking is that most of the business owners present were almost exclusively people of color and women. This was shocking because usually most of the bidder meetings I attend are lily white (e.g. Bucks arena). Westlawn is due for redevelopment-and it is a community of color-just like hopefully those who get to bid on those improvements. Before the meeting began, there was of course lots of conversation about how the "riots" hurt business. Certainly as an owner-a consideration-no one wants to see their investment go up in flames. It's that word ownership that I think has been left out of the conversation. I believe strongly in a Live-Work environment, and I am known in my neighborhood, by professionals, working class, but most important addicts, prostitutes, and what some might call "adult trouble makers". They know me because almost everyday, as part of my prayer and meditation, I pick up garbage-from empties to condoms in the alley and on the block. I do this because (1), The name of my business TransformationServices, Inc. (TSI) is on the door of the building, but because, (2) I live here. My parents did the same-and cared about our neighborhood-and I saw that. It's a cliche, but I often say I am likely the last of a generation of African-Americans where EVERYBODY who lived in the neighborhood looked just like me-so I had a multitude of role models to ascribe. The man next door was unemployed, my father worked as a welder in the shop (General Motors), and my family physician lived down the street. Many of these neighbors served as surrogate parents (even the guy next door) and reported my bad behavior. My mother did not say "Ingrid didn't do that", I was disciplined. Swiftly.

In a perfect world-we could recreate the village we had for one another from this bygone era-but we can interpret and apply in a more creative way. I'm sure those who don't live in that area have all kinds of ideas to offer-but the truth is Sherman Park should be at the forefront of "solving" this problem-and that includes the violence. Violence is just the end result of rage-and despite what the chief says the police have little or no mental health, or even multicultural training which complicates petty traffic stops (why are they still doing that)? This community denied now of its park, and community gathering place could likely police itself, needing less help. (And by help, I'm meaning the broader definition-nothing wrong with offering snacks and water to those cleaning up, or actually facilitating clean-up). Peace walks while demonstrative-are really preaching to the choir. I'm sure there are those in Sherman Park, who like me pick up trash regularly-but others who don't have any "ownership", just like in my neighborhood can't be bothered.  It's the every day, unnoticed by most, actions by a few that make a neighborhood. Not that tragedy doesn't strike-it's the reaction of the neighborhood when it does. I believe my beautification efforts are small, but impactful. In addition to conversation and garbage detail-TSI has a wellness approach to health that I share. We have a walking track (that same alley), that our students and staff plant with flowers that we give away-believing that like food for the body, flowers and herbs help the mind. We offer those residents that are interested a chance to sit freely in on our Treatment to Training sessions-you never know when a life choice seed will sprout. This is just some of the things that TSI does-but everyone has some expertise they can share-either in your face, or from afar-fearless role modeling. That issue also points to job creation-and the need to still demonstrate to others what the possibilities are not just here locally, state, nation and worldwide. Though my parents had never traveled much outside of our Avon Street neighborhood, they instilled in me that I could. The bits I post on other social media intentionally reference world events: arts, politics, sports. If we don't embrace not just our youth, but adult "trouble makers", reminding them they too can make different life choices. One mistake is not the end. The young adult who was killed-had role models-one of which was his father which did not overshadow his time at the Sherman Park Boys and Girl Club.

I'll admit that yes, my business does dovetail nicely with the needs of my community-but I'd do it anyway. Everyone can share what they do or did for a living or hobby. Undiagnosed mental illness and substance abuse-is my mantra-and I'll speak on it until I take my last breath. I'm sure that may be why some who live and work in these communities are hesitant to get "involved". But get involved with those residents we look away from-we must see them. I see them while picking up trash, and at the very least-say hello. With the Affordable Care Act and Substance Abuse and Mental Health Parity-accessing services are not perfect, but better. In this one woman's opinion-the health of this community should be left to those who actually live there to decide-and then devise a way to present and request economic opportunities for its residents which may include business ownership. And speaking of help, some of these people that are flocking to "help", likely see financial gain. I agree whole heartedly with Marjorie Rucker, Executive Director of The Business Council-who I first heard make that assertion.

Circling back to my HACM meeting, because most of the development in Milwaukee has been in the downtown area, (Rocky Marcoux recently had difficulty with his reappointment because of that focus) Sherman Park is now in the driver's seat to obtain any business-and I emphasize business-development plan they  desire-even though it's a residential neighborhood. They just need to ask. I was pleased to see so many minority businesses represented at the HACM-but Westlawn or any other neighborhood could be next without their faithful few. I'm hoping that from the flames a few phoenixes of Sherman Park rise.